Classical Concert Listing in the Netherlands

free or nearly free or donations-only or recommended concert listings

Anticipation is half the fun. Time-challenged culture vultures (concert goers and connoisseurs of artistic indulgence) appreciate previews to help them decide on the right concert to attend. Listed below are events that are free or well worth attending. Linked below are programme notes I have compiled before the concert to help me make sense of what will be performed. I prepare these previews for the concerts in which I participate as a performer, composer, organiser, reviewer, or simply a member of the indulgent audience because I know somebody who is actively involved as a performer, composer, conductor, publicist, or organiser. Regretfully I am not always able to attend all concerts listed here.

If you would like to join my mailing list of selected concerts, please let me know who you are. If you would like to announce a forthcoming concert and invite me to attend, please e-mail me. Alternatively, check my events list which includes even more concerts not listed here! If you want to see me in concert, visit the Piano Guitar Duo site which contains concert dates throughout the Netherlands. Enjoy! ANNE

Sorry! no announcements in Utrecht for I have been in London all summer!

Some of the best free concerts are the final exams at the conservatory where students present their best work. Visit Utrecht Conservatory final exam calendar for dates/times. Nearly all are held at Mariplaats 27 or 28, Utrecht - near the central station.

Sat 29 March 2008 from 10 am to 4 pm FREE
Open Day at Utrecht Conservatory
featuring classical music concerts in the main hall and jazz and pop concerts in K108
11:30 am - 12 noon violin, guitar, piano trio and more
Mariaplaats 27 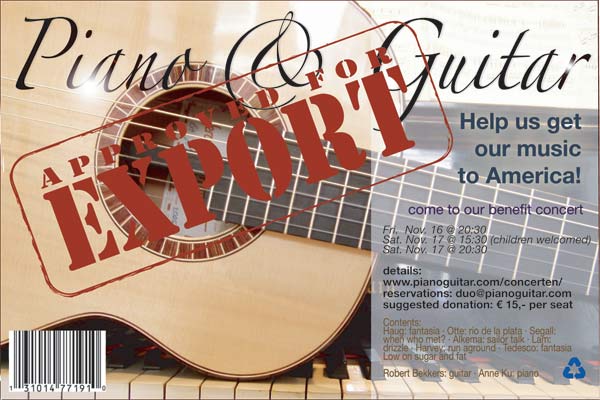 Saturday 24 February 2007
Premiere of interludes "Echoes from the Past" for recorders and Baroque violin by Anne Ku,
E-Live Concerts in the spacious and over-reverberating Nicolaikerk, Utrecht
20:30

Tuesday 24 October 2006 from 4 to 5:30 pm Utrecht
New Music for the Harpsichord
free talk and performance
Elaine Funaro on contemporary music for the harpsichord
to an audience of composers, harpsichordists, and anyone interested in new music
1- page PDF Mariaplaats 27, Utrecht Conservatorium, Room K310

There is a place in Amsterdam, I think it's on Herengracht, a ground floor flat where I attended my first house concert in the Netherlands. The owners, a middle-aged Dutch couple, regularly organised house concerts under their double-height ceilings with their stackable chairs and grand piano. The late American composer and pianist Robert Avalon had invited me to that concert in which he had also performed. It was also the first house concert I attended with the Dutch guitarist Robert Bekkers, with whom I now have a piano guitar duo and a life together. We produced many house concerts in London in my compact Victorian cottage. This year (2006) we bought and restored a turn-of-the-century monument house next to a canal for the purposes of holding house concerts, accommodating musicians and scholars from abroad, and recording our music.

FREE CONCERTS IN NETHERLANDS - no booking required, just go early to get a good seat

If you know of other free (or nearly free) concerts that occur regularly, please contact Anne Ku.